Yet another World Record falls as DockDogs warms up for the 2012 World Championships in Dubuque! 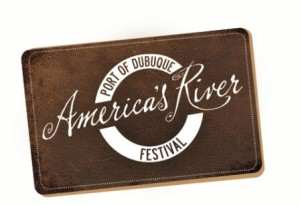 As a warm-up in the host city for the 2012, 2013 & 2014 DockDogs World Championships, we knew that the stellar family of DockDogs competitors would bring their all to America’s River Fest in Dubuque, IA. As always they didn’t disappoint. With World Record holders, former World Record holders and many more of the best teams in the country in attendance, it was only a matter of time before something extraordinary went down. Year after year in Dubuque we see some of the best crowds any live sport could ever ask for, and they were on the edge of their seats all weekend long!

Kicking things off late Friday afternoon with Big Air Wave #1, we saw the arrival of many familiar faces from around the Midwest, but it was DockDogs veteran and Hall of Fame member, Tom Dropik 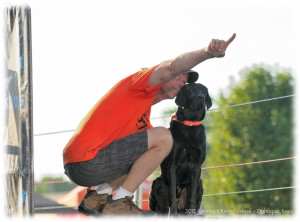 After enjoying an amazing River Fest concert on Friday night, we started things off Saturday morning with Big Air Wave #3. Tim McClintock finished in the Top 2 spots, as Stratus (20’8”) took 1st place and 3 year old Chocolate Lab Polaris (19’8”) took 2nd place. Rick Laes and his 3 year old Yellow Lab named Attie from DePere, WI finished in 3rd with a score of 18’1”. After getting a little extra sleep, the teams started to pile into the DockDogs compound for Big Air Wave #4. Sean McCarthy and his 5 year old Chocolate Lab named Jordan from Riverside, IA out-jumped the competition by almost 3 feet with a winning score of 25’2”. Brian Lilly and Roscoe finished in 2nd with a score of 22’6”, while Tim and Stratus finished in 3rd with a score of 20’2”.

Sean and Jordan added over a foot to their previous winning jump, this time getting all the way out to 26’7” for the win in Big Air Wave #5. Gary Hansen and his 3 year old Black Lab named Jackson Gauge from Minnetonka, MN turned in a stellar jump of 23’3” for 2nd, while Brian and Roscoe rounded out the Top 3 with a jump of 21’2”. Sean and Jordan continued their winning ways in Big Air Wave #6, this time with a score of 25’8”. Gary and Jackson Gauge added over a foot to their earlier score, jumping out to 24’4” for 2nd place, while Bob Sorenson and his 5 year old Black Lab named Shadow from New Ulm, MN finished in 3rd with a score of 21’11”.

After six consecutive waves of Big Air, it was finally time to switch things up a bit with crowd-favorite Extreme Vertical. After taking 3rd place at the 2011 World Championships, Bob Sorenson and Shadow had to be the favorite heading into the Final. They did not disappoint, jumping up to a new personal best of 7’8” to stand atop the podium. Tom Dropik and Remi battled hard and finished 2nd with a score of 7’2”, while Tom and his new pup R.J. took third and better their personal best by over 6 inches with a score of 7’0”.

As has become the custom in 2012, we kicked off Sunday with the finals-qualifying wave of Speed Retrieve. With the Indoor and Outdoor World Record holder’s and Reigning World Champion’s Tom Dropik and Remi, as well as former World Record holder’s and World Champion’s Sean McCarthy and Jordan in the field, excitement filled the DockDogs Compound as the teams took to the dock. In a hard fought battle, it was Tom and Remi that came away with the #1 seed heading into the finals with a time of 5.127 seconds. Sean and Jordan nipped right at their heels with a time of 5.240 seconds, while Jessica Johannes and her 5 year old Yellow Lab named Phoenix from Hudson, WI finished in 3rd with a score of 7.117 seconds.

The moment everyone had been waiting for had finally arrived. The battle of the World Champions was finally upon us once again and they certainly did not disappoint. Sean and Jordan not only took down the current World Record holders and Reigning World Champions, they also set a new Outdoor World Record in the process, with a blazing time of 4.751 seconds. Tom and Remi did a great job, but finished 2nd with a score of 5.118 seconds, while Tom and his newcomer R.J. finished in 3rd with a score of 6.648 seconds.

4 teams qualified for a spot in the coveted Pro Division of the Big Air Finals, but it was Sean and Jordan that continued to dominate with a 1st Place score of 25’10”. Jessica and Willow out-jumped the rest of the field to finish 2nd with a score of 24’3”, while Gary and Jackson Gauge finished in 3rd with a score of 23’11”.

In one of the biggest surprises of the weekend, Wayne McClain and his 1 year old mixed breed named Splash from Hastings, MN. They busted out a new personal best by almost 5 feet to win the Semi-Pro Big Air Final with a jump of 24’10”. Jessica and Phoenix jumped a very respectable 22’1” to finish in 2nd place, while Jeff Salisbury and his 7 year old Chocolate Lab named Indy finished 3rd with a score of 21’2”.

Finishing things up with the Amateur Big Air Finals, the state of Iowa pulled out all the stops to capture the Top 3 places. James Ferentz and his 1 year old Yellow Lab named June from Iowa City took home the win with a jump of 19’2”. The local Dubuque team of Kelly Fitzgibbons and his 6 year old Black Lab named Butch finished in 2nd Place with a jump of 18’10”. Rounding out the Top 3 was Jen Firzlaff and her 9 year old Golden Retriever named Riley from Des Moines with a jump of 17’4”.

DockDogs would like to thank everyone involved with America’s River Fest and the City of Dubuque for allowing us to be part of this top-notch event. We’d also like to thank all of the teams that came out to compete with us and the amazing crowds that came out to support us. We can’t wait to see you all again for the DockDogs World Championships in November!