Tom Dropik of SportMutt has been a long time competitor, contributor, and 2004 DockDogs® Hall of Fame inductee. 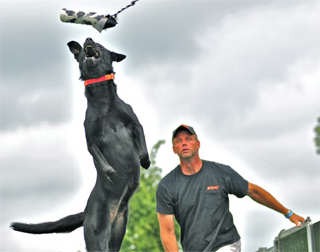 The sport of Big Air® is growing by leaps and bounds. It’s getting more media attention and dogs are jumping farther and farther every day. The sport is also bringing out more and more new handlers and dogs. As SportMutt continues to travel the country observing and helping people get involved, we’ve noticed handlers using a technique that is commonly described as “what top handlers do.”  Very often we hear “I see the big jumpers use it, so I figured it must be the technique to use.” This technique is commonly known in the industry as “The Chase.”

First of all, let’s get a good understanding of what this technique is and why it is so common among the top handlers. There are three aspects to a successful Big Air® jump: speed, lift, and the ability to hit the end of the dock. “The Chase” is a technique that helps ensure the dog gets that ever elusive lift. The idea is to set the dog at the start point, the handler stands at the jump point, the handler releases the dog and times the throw so the dog will chase the object at the moment the dog jumps. The purpose is for the dog to jump up and out after the object, thus getting the lift. The motivation for the dog is to try and catch the object. It’s that simple.

Next, we need to look at why this technique is so commonly misunderstood and misused. Although “The Chase” is a great technique for obtaining the lift, it can be a detriment to the dog’s speed — the other important aspect to a successful Big Air® jump. There are many reasons for this loss of speed. The most common reason is the dog simply not knowing what its objective is and slowing down to watch the handler and the object in the handler’s hand.

“The Chase” is a technique that needs to be trained and trained properly. The idea is to motivate the dog to go after the object in the air attempting to catch it while running at maximum speed. The dog needs to understand the technique and then be trained to utilize it to its fullest potential. In the dog world, a typical retrieve is based on the object lying either on the ground or in the water. Now, there may be variations of this, like the dog running after the object while the object is still moving, but the object is on the ground or in the water when the dog gets to the object. “The Chase” introduces an entirely new concept of retrieving.

Next, we’ll discuss a training method for The Chase that has been very successful for us at SportMutt. Speed is always top priority with us–work toward maximum speed and obtain as much lift as possible while maintaining that speed. Speed will only happen if the dog is confident and focused. It is obvious to us that the simpler the routine on the dock, the more focused and confident the dog will be.  “The Chase” technique is far from simple, especially for new handlers. It’s an entirely different game for the dog. If the handler is standing at the end of the dock while the dog runs toward the handler, the dog not only has to focus on running, hitting the end of the dock, and jumping, it needs to focus on the handler and understand why the handler is holding the object in hand. Then the handler tosses the object and the dog wonders where the object went. To simplify “The Chase,” ensure its success, and make it routine for the dog — it has to be trained in progression.

SportMutt starts on dry land. This is where we build the routine and with the routine comes the confidence. Measure out a 40 foot run to simulate the dock. Start working retrieves where the dog is sitting at the 40 foot mark and the handler is standing at the other end. This is the initial phase of “The Chase.” The key is to toss the object and at the same time release the dog. Do not hold the object as the dog approaches. This is the beginning phase of progression and the dog must learn to drive hard in this routine. This will help to increase speed.

Once the handler is confident the dog is running hard using this routine, the handler can then bring it to the dock. Go through the same routine exactly as performed on dry land. Remember, the key is NOT to hold the object as they approach.  The idea is to get the dog comfortable and confident with the routine. Get the dog to understand that, YES, the object will be tossed.

From there, we cross train this routine on Dry Land and the dock. With this progression, the dog learns that the object is getting tossed out into the water and the dog learns to run hard after it and increases confidence on the dock.

Next, we move back to dry land and begin to hold the object a bit longer. Start working retrieves where the dog is sitting at the 40 foot mark and the handler is standing at the other end. Only this time hold the object for a stride. The idea here is to begin allowing the dog to get closer before making the toss. This is the middle phase of progression and the dog must learn to drive hard while keeping an eye on the object. From there, we cross train this routine with the dock.

Next we begin to work the catch.  “The Chase” will be ineffective if the dog doesn’t think it can catch the object. We start again at dry land for this. We start out very close. Set up the dog about a foot away and simply toss the object out about a foot and at the dog’s eye level. The idea here is to get the dog to lunge out after the object catching it in its mouth. One very important thing to keep in mind while working on Dry Land–never throw an object higher than the dog’s eyes. Injury can occur if the dog jumps too high trying to catch the object.

From there it’s a progression game again. Start lining the dog up a few feet back and go from there. Then take it back to the dock to reinforce the dryland training and the routine for the dog.

If “The Chase” is trained in this fashion, the dog’s confidence will improve and its understanding of your expectations on the dock will improve and soon it will all come together for even bigger Big Air® jumps.

What are your favorite Big Air® training tips? Share in the comments below! Stay tuned as we will continue to bring new training tips, handler highlights, and SOON “guest bloggers” to the Latest From The Dock blog!