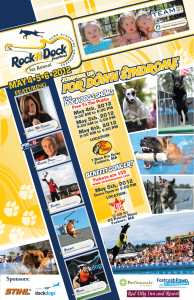 GoTeam21 is a non-profit founded by Dave Skoletsky organization whose mission is to raise awareness about the importance of early intervention programs in helping children with Downs Syndrome live their lives to the fullest. Rock-N-Dock raised over $40,000 for Down Syndrome Awareness, thank you to all those that contributed to this noble cause.

GoTeam21 aligned themselves with companies like Bass Pro Shop, Patriot Place (home of the New England Patriots) and ShowTime Live to produce ROCK-n-DOCK Festival,  three days of fun and entertainment.

The weekend opened on Friday with the DockDogs® National Championship Sportsmen’s Series. Teams from thirteen states as far away as California came to support this great benefit.  Five Big Air® waves set up the day of qualifying for teams trying to find a spot in the Sunday afternoon Main Event finals.   A lot of personal best jumps were a result of the high caliber teams pushing to their limits.   Names like, Lise Strum and Vhoebe, Tony Lampert and Baxter, Mike Chiasson and Taz, Tom Dropik and Remi, Dave Skoletsky and Yeager, Dawn Sullivan and Ash,  just to name a handful.  There were jumps of 2’2” from first time DockDog competitor Cassie-Leigh Stock and her lil dog Sparkplug to the Super Elite Teams jumping past 27 feet.

Saturday brought clearer skies and warmer weather with the anticipation of everyone’s favorite DockDog® competition, Extreme Vertical™ or EV, the High Jump of DockDogs®.  A total of nineteen teams entered the event to find a first place in the Cadet, Top Gun or High Flyer divisions.  The Cadets started at the 4’6” mark and went up by two inch increments.  Each team was allowed two total misses throughout the competition. It was Youth Handler Sydney Demeo and Echo from N. Woodstock, NH and Terry Haskins and Ronin from Norwell, MA tying for the Blue Ribbon with a final jump of 5’6”.  Second place went to the President of the Seacoast DockDogs club, Louis Dubois and his mixed breed named Bailey at 5’6”.  Rounding out the top 3 in the cadet class was Chester and his handler Jeff Leonard.

The Top Gun Division had an incredible battle with the top 5 dogs.  Bob Warren and his Belgian Malinois, Biscuit, had to bow out at 6’4” earning them a 3rd place finish overall for the weekend.  6’8” proved just a hair too tall for the teams of Jesse Dalton and his lady, Abby, and New Windsor, NY‘s very own Brian Tait and his Yellow Lab, Atlas who both took home the silver place medal with a final grab of 6’6”.  The battle for 1st in the Top Gun Division came down to the 2010 Iron Dog World Champion, Tony Lampert and Baxter, and Mike Chiasson and Taz.  Going back and forth, exchanging blow for blow, it would be 6’10” that would lead to a stalemate between the 2 fierce 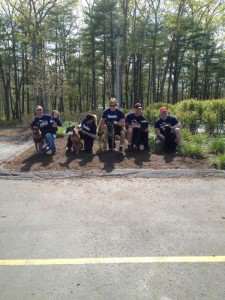 competitors and both would leave with a gold medal and a mutual respect for each other later shared over a round of squeaky toys.

When you’re in New England, there’s only one way to describe something amazing, something so incredible, and that word is wicked. And when it came to the High Flyer division of Extreme Vertical™, Wicked Awesome it truly was.  This typical Saturday afternoon played out a lot like a Saturday afternoon with Charlie Sheen, tons of action, winning, and a pool full of Yeager!  Godfather of the sport, most decorated competitor in DockDogs® history and the only man who needs a chainsaw to cut his steak, Tom Dropik and his partner in crime Remi would go head to head against The Golden State’s very own Lise Strum and Vhoebe and the current World Record holder, Dave Skoletsky and Yeager.  In the end, once the dust cleared and the sweet smell of victory lingered in the air, Dave would prove once again that you can’t beat a man and his freakishly huge jumping kangaroo, deer, LeBron James hybrid super pooch.  Dave Skoletsky soared past the competition with a final jump height of 8 feet.  Vhoebe and her handler Lise Strum and Remi tied for 2nd place with Mike Chiasson and Taz coming in third.  With any DockDogs® event, Extreme Vertical™ offered that WOW effect one more time to a MASS-ive crowd of fans.

Speed Retrieve™ requires a certain set of skills much different than those needed in Big Air® or Extreme Vertical™.  It requires patience, timing, teamwork, and the ability to swim faster than a dolphin on Red Bull.  With a strong field of competitors stretching over 2 countries, that 1st place trophy was there for the taking.  Making a strong presence and letting everyone know that he came with his A game, was Tom Dropik and Remi who set a new outdoor World Record at 4.831 seconds, setting the bar high for his competition going into the finals.  The finals saw a lineup resembling that of any Massachusetts sports team; there were World Champions, Record Holders, and even a Tom.  3rd and 2nd place had to be decided by only one hundredth of a second.  Dawn Sullivan and Ash from Methuen, MA had a run of 5.667 only to be edged out by Lise Strum and Vhoebe who ran their best time of 5.560 earning them the 2nd place trophy overall for the weekend.  But it proves that you can’t beat experience, wisdom, and a dog that should have been in that new Avengers super hero movie.  Taking home another World Record, a 1st place trophy and 30 hour drive home was the Godfather himself, Tom Dropik and Remi. 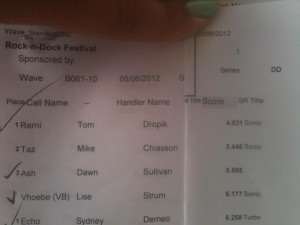 The signature event of any DockDogs® event is BIG AIR®.  There’s no special training needed, no dress code or specifications to meet.  If you’re a dog, you like the water and you don’t have an addictive personality, than the sport of BIG AIR® is perfect for you.  When you come to compete in Big Air® always remember to make a checklist.  Water? Check. Kennel? Check. Leash? Check. Minivan full of dogs? Check. New credit card for the other 19 waves you didn’t sign up for online? Check.  And so on.  But if you’re coming to compete in Foxboro, MA you better make room for your big guns cause if you want to win Rock-n-Dock 2012 then you better be ONE BAD MOTHER JUMPER!

In the Amateur division, it would be the Yellow Labrador, Tucker, and his handler Tim Merrill who would earn top honors with a jump of 21’5”.  Louis Dubois and Ally would  finish in second place with a top jump score of 18’5”, with Jesse Dalton and Molly rounding out the top 3 with a score of 17’6”.  Moving into the Semi Pro finals, we got to see the EPIC Boston vs. New York rivalry transfer to the dock with the New York team of Brian Tait and Atlas who stumbled into Boston Territory against Chicopee, MA’s very own, Charlene Shea and Murphy.  With an underlying grievance against New York specifically pertaining to a game played last February, Murphy couldn’t let that happen again.  It would be their first jump score of 22’7” that would lead to their 1st place victory over Brian and Atlas.  The Pro Division saw some the country’s biggest and best Big Air® Teams gather for bragging rights and past rivalries.  The team of Mike Chiasson and Taz would have to fend off Lise Strum and Vhoebe for that 3rd place finish with a top jump of 25’6”. Past World Champions Tony Lampert and Baxter had their top jump of 26’1” topped by Dawn Sullivan and her 3.5 year old mixed breed Ash by only 3 inches, reaching out to 26’4” earning them the Rock-n-Dock 2012 Big Air® Champions.

Congratulations to all of the competitors and a big thank you to everyone who supported this great cause.  It’s the competitors, sponsors, and staff of this sport who realize the greater need to help and with that we thank you.

What were your favorite moments of Rock-N-Dock? We look forward to seeing your photos and stories in the comments below.