The Sozio family is the second in our Handler Highlights series. One aspect of DockDogs® that is so great is that the family can come together and all have a blast with their dogs. Steve and his wife Heather and their son James have two dogs in their family. The whole family handles Twister who is a 5 1/2 year old female Chesapeake Bay Retriever who Steve told us is the “athlete”. In addition the Sozio family has Quake who is a 2 1/2 year old Jack Russel Terrier who is the “cheerleader”.

This season will mark the fifth season participating in DockDogs®. Their first event was in May of 2008 with Chesapeake DockDogs® at Lilypons in Adamstown, MD. I asked Steve to tell me a little bit about their first experience with DockDogs®. 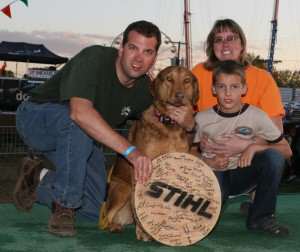 We have been hooked ever since our first event in MD. James started competing in November 2008 at the Easton Waterfowl Festival when he was 6 years old. The friendships we have formed and the times we have spent together as a family have kept us coming back.

Twister has been a great competitor over the years with huge accomplishments on the dock. She has earned Elite, Top Gun, and Iron Dog titles with both Steve and James, a master title with Heather, and Turbo titles with the entire family. James Sozio was named the 2011 DockDogs® youth handler of the year. Heather Sozio with Twister was the 2011 Master Division National Champion.  The family has been competitors at two DockDogs® National Championships. In 2009 the entire family were competitors and in 2011 both Heather and James. This is not to mention that they have also been able to compete in 3 World Championships. The 2012 World Championships will be their fourth year.

Out of all the disciplines in DockDogs®, Twister loves Extreme Vertical™ the most.  It is all about instant gratification. You either move on or you are finished.  She is so excited off the dock and she barks her head off when another competitor gets to jump before her.  As soon as she is on the dock it is all business.  She sits down and just waits until she is told to go.

Well how about the Sozio family? Which discipline as handlers do you most enjoy?

Big Air® is our favorite as handlers because we can break it down to a science.  We know what will get Twister to jump big; it’s a matter of putting it all together for that jump.  Using the right toy (a normal stick is her new favorite), getting her excited, having a solid sit-stay, and timing the throw just right seem to be the perfect combination. [sic]

Now that I knew the Sozio family and Twister enjoy Extreme Vertical and Big Air the most as handlers and teams I was interested in what they thought about the Speed Retrieve discipline and Iron Dog rankings:

James and Steve love the idea of Iron Dog, but we can’t seem to convince Twister to have the same excitement for Speed Retrieve™ as the other disciplines.  She will swim as fast as she can after a stick in a river, but a bumper hanging at the end of pool, she’ll take her time.  It will be there when she gets there.  (Maybe we could use some tips from SportMutt).

During their five years of being part of DockDogs the Sozio family has had the opportunity to travel and experience events across the country; they especially enjoy pond events. Their son James favorite event was at Clay’s Park just outside of Canton, Ohio. Steve says he loves to be able to play at the water park and enjoys mini golf. James nailed a massive jump with Twister with a 24’10” jump knocking his father out of the Pro Finals! 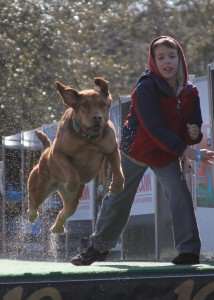 The Sozio family has had many journeys around the country spending time together with their dogs. I asked what their favorite event was as a family:

Our family’s favorite event so far was the DockDogs® World Championship in Stillwater, MN in 2009.  That was our first long trip, 15 hours. The event was one of the best, with the setting on the St. Croix River in a quaint town, constant action with lumberjacks between dog waves, huge crowds, and our first time meeting competitors from the west coast.  We also enjoyed watching one of our friends from Keystone DockDogs®, Andy Fink, squeak out a win in the Iron Dog Competition with Wilson.  It was an awesome trip. [sic]

How did the Sozio family go from spectators to a family of competitors? They would take Twister down to a local river and noticed she was jumping off a section of the bank without any hesitation and decided to try out DockDogs®. Just around this time they found their was an event the following weekend at Lilypons in Adamstown, MD which is approximately an hour away from their house.

Steve showed up with Twister, a chair, and Twister’s favorite toy at the time which happened to be a volleyball she stole from the neighbor’s kids. Twister’s first jump was a massive Senior jump and the rest is history; they were hooked from that day forward. Steve wanted me to note that of course they have purchased more supplies and toys since her first jump.

With all of the experience the Sozio family has we wanted to share what tips they have for a new handler just trying DockDogs® out.

For new handlers, this sport is really about communicating with your dog.  We were lucky that Twister showed us that she loves the water.  We had to work on her sit and stay, which we practiced at home mainly when we played.  She sits for everything now including her food, treats, and toys.  Building a bond and an understanding with your dog will help you enjoy and succeed in this sport.  [sic]

As DockDogs® and it’s competitors continue to grow as a community we wanted to see where Steve Sozio and his family see the sport heading in ten years.

We see DockDogs® as a wonderful family sport and we hope to see that aspect continue to grow.  DockDogs has made significant strides with this, continuing to have free membership and discounted wave fees for youth, and having Youth Handler competitions at the World Championships the past two years.  [sic].

We hope to still be in the sport in 10 years.  We’ll never have another Twister, but there is another Sozio on the way.  We look forward to having our next Youth Handler learn all the same things James has learned through the sport, the value of hard work, sportsmanship, appreciating successes, and dealing with the adversity that comes in any part of life. [sic]

DockDogs® would like to say Thank You you to the Sozio Family for their contributions in this article and for being part of the DockDogs® community.