For this installment of the Handler Highlights series we interviewed Nancy Akin and team 4 Dawg Flite. She is also in charge of Dixie DockDogs publicity. 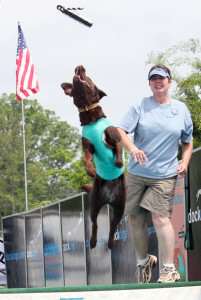 Nancy has been a part of the DockDogs community since June of 2008 where she attended her first event at the AFLAC Outdoor Games. She has been a die hard DockDogs competitor from that day forward.

I’ve gone to events from Florida to Ohio, from Maryland to Seattle. I love going to club events and seeing how all the members interact with the newbies. Most club events are such a laid back, fun time. If I could, I would spend my entire summer with Sally going from club event to club event. [sic]

Nancy has four labrador retrievers: Sally, Spud, Hoppy, and Badger. She mainly jumps Sally and sometimes Spud. Nancy told me that Hoppy is the cheerleader (the Sozio Family has Quake who is the “cheerleader) of the family and Badger is the old fella who mainly enjoys going to events because he gets time to rest.

With the three main disciplines and the addition of the Iron Dog divisions here at the DockDogs Worldwide head office we are always interested in which competitions are a handlers favorites.

Sally and I both enjoy doing Speed Retrieve the most. I like it because it has the most handler-dog interaction. Sally likes it because she’s allowed to get all revved up and go crazy up on the dock. Of course, we enjoy all three jumping disciplines, which leads us to Iron Dog. I am so excited about the new Iron Dog divisions, as Sally is always right at the top battling it out for Iron Dog Warrior. She’s a good jumper, but will never be one of the big jumpers, so the Warrior division is just right for team like Sally and me. [sic]

With all of the travelling Nancy has under her belt to compete in DockDogs events we knew asking her for her favorite event would be next to impossible. She was able to narrow it down to her top three favorites: 2009 National Championships, Care-A-Lot in Virginia Beach, and her very first club event in August of 2009, the Fishing Creek Outfitters Throwdown. 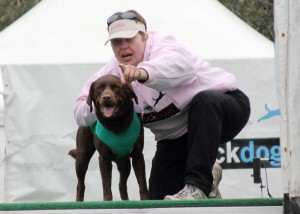 The 2009 National Championships were absolutely awesome! It was DockDogs’ 10th anniversary, and every person I know from all over the country was there.

Another event that was unforgettable was Care-a-Lot in Virginia Beach. We’ve only been once, but we made so many great friendships and learned so much from everyone.

A third event that is probably the sentimental favorite was our club’s very first event in August, 2009, the Fishing Creek Outfitters Throwdown. Bill and I had worked so hard to get the club built up and able to put on an event. We finally had a group of people all excited about doing this event and willing to work tirelessly for the club. That Friday morning when I drove up to the venue just before it all opened and saw everything set up…the pool and dock, tents, banners, merchandise…and saw everyone working together, I honestly choked up with tears welling up in my eyes. The dream that Bill and I had worked for, worried over, labored so long to accomplish was actually coming true. A Kodak moment for sure. [sic]

As a long time competitor and DockDogs fanatic we had to ask what Nancy’s favorite discipline to watch is:

My favorite discipline to watch is Extreme Vertical. I love it when it gets down to the last two or three dogs, and it keeps going back and forth. I like watching the crowds and seeing the expressions on their faces at some of those EV jumps. [sic] 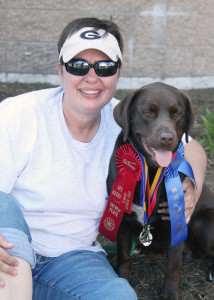 I was interested in knowing how Nancy came to be so actively involved in DockDogs and she replied:

In 2000, I was surfing channels on the TV and saw DockDogs on the Great Outdoor Games. I thought it was about the coolest thing I had ever seen and wanted so very badly to get involved. The problem was the only dogs we had were Basset Hounds…not exactly dock dog material. However, I kept this sport in the back of my mind, and in 2006 we got a chocolate Labrador Retriever puppy named Sally. I couldn’t wait until she was old enough to try dock diving. When Sally got old enough to participate, I googled “dock diving Atlanta” and came up with the DockDogs forum. I began inquiring how to get involved. Sadly, I found out that there were no clubs anywhere in the South and almost no DockDogs events at all down here. Bill and I solved that problem by starting Dixie Dock Dogs in March of 2008. Working with Bill to bring DockDogs down here to the South has been very satisfying indeed. In June 2008, Sally and I participated in our first event (AFLAC Outdoor Games). From there, it was off to the races!

We are always trying to improve DockDogs so we love to hear where the community thinks the sport will be in 10 years. 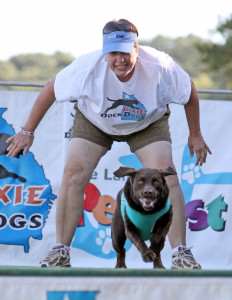 I see the local, grassroots aspect of DockDogs really growing over the next 10 years. With the advent of the Regional Championships and the growth of the Sanctioned Facilities, this sport is going to spread even wider and faster with more people becoming involved. The new restructuring that has occurred this year really opens up DockDogs to more and different aspects of the sport. The key, in my opinion, is DDWW making sure the local clubs have the support they need to grow the sport. [sic]

Working in DockDogs over the past few years has given me a new appreciation for both people and dogs. Some of the most awesome people I’ve met in my entire life are DockDogs people. Watching people competing with each other actually going out there and helping each other is truly awe-inspiring. [sic]

I would have to say the single best gift I have been given by DockDogs is the chance to build such a strong bond between Sally and me. All the training, the practices, the events, the time on the dock, the traveling to and from events, the time sitting under our tent…it all has weaved a trust and best-friend relationship with Sally that can never to broken.

DockDogs would like to thank Nancy Akin for her time in helping us write this post and for her continued support, thank you for being part of the DockDogs family.

Where do you think DockDogs will be in 10 years? What are your suggestions for new handlers? Share in the comments below!