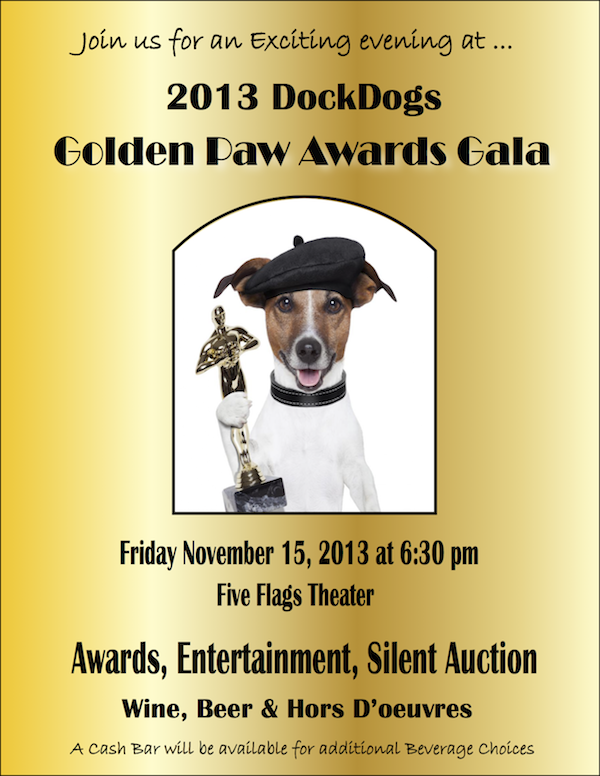 I hope you are enjoying this record-breaking year which DockDogs® Worldwide has been experiencing.  It certainly has been an interesting & exciting year in regards to the setting of new records, across our community and events.  World Records, Attendance Records, Participation Records, etc.; and as we are heading into the last weeks of the 2013 Season, we are looking to set a new attendance record for this year’s World Championships and Gala celebrations.

In past years, the year-end banquet and awards ceremony has been centered on the National Championships and more recently the World Championships, and were primarily attended by those teams who were participating in addition to their family and friends.

We wanted to take this opportunity to update the DockDogs® community on some of the changes we have implemented for this year’s celebration, and I would personally like to extend an invitation to all of you who are involved in DockDogs® Worldwide, to join us at this exciting event. [Golden Paw Awards Gala Registration Form – PDF Download]

As we close out the 14th year of DockDogs® as a company, we are excited about what the upcoming 15th year has in store.  Over this tenure, we have seen many changes, additions, and improvements in both the popularity and the growth of DockDogs® Worldwide.  I recall my first year-end celebration back in the fall of 2005, where there were 62 avid Dock-doggers in attendance of the banquet.  Wow, how time has flown by and things have changed.  Each year as we draw towards the end of the season we look forward to the awards banquet… well this year it is going to be even bigger and better!

As most of you may be aware from the announcements by Jim Zelasko, the Official Radio DockDogs® Host, we have implemented a new format and assigned a new name for the year-end awards and celebrations “The Golden Paw Awards”.   This Gala event will take place in a Theater Setting at the Five Flags Center in Dubuque, IA.  Since retuning from the pre-trip meetings at the venue, the entire DDWW Management team has become increasingly excited as we look forward to this Grammy/Emmy style celebration, which will honor our Champions and People’s Choice Awards recipients, amidst their family & Friends and hopefully as many of you as possible.

While not everyone is eligible to earn the coveted invites to compete at the World Championships, it goes without saying that the more who can attend the bigger the celebration.  So if you are able, please consider joining your fellow Teams for a couple of exciting days in the wonderful city of Dubuque, Iowa and dawn your tuxedos or suits and formal gowns, to join us in this formal affair which celebrates the year end achievements and recognizes all who have earned them.

We look forward to seeing you in Dubuque and as always more jumps… more fun!  Many thanks for your continued support.

Wow, what an unbelievable year 2013 has been and there’s still more to come!

The People’s Choice Nominations are in and tallied up, now it’s time to to open up voting! The nominations were very close with so many great Teams, Announcers, Cheerleaders and DockDogs Events on the ballot; be sure to cast your vote and have your voice & bark heard.

You can cast your vote for the People’s Choice Awards until October 18th at 11:59pm EST. Please find the official rules below:

You can sign up for the Golden Paw Awards Gala online now by visiting the Special Events page or by downloading the form online. With the first ever gala style event in a beautiful theatre setting at the Five Flags Center, it’s going to be quite a magical evening. Whether you’ve been lucky enough to earn an invitation to the World Championships this year or not we encourage you to attend the first ever Golden Paw Awards!

The gala is going to be quite the Super Elite affair. The gala will feature hypnosis and comedian acts, Hors d’oeuvres, a beautiful theatre and of course the unveiling of the Golden Paw Awards and ceremonies! This will be a night you do not want to miss out on, we hope to see you there.