What do DockDogs® and Down syndrome advocacy have in common?

It may sound like a joke, but the answer is not only serious, it’s downright inspiring. Both DockDogs® and Down syndrome advocacy happen to be the passion of Dave Skoletsky of Stoughton, the Owner of Sit Means Sit dog training, Dave has managed to parlay these “hobbies” into a remarkably successful outreach campaign that makes a real difference in the lives of people with Down syndrome. 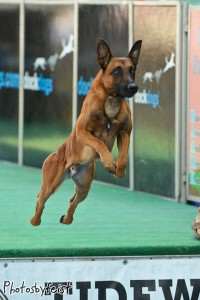 The vehicle for Dave’s vision is Yeager, a 3-year-old Belgian Malinois who, like Dave, has a heart of gold. Early this year, Yeager – who Dave found on Craigslist – set the world record for Extreme Vertical, leaping 8’4″ in official competition. The key to their success? Yeager’s strength, agility and focus, in combination with Dave’s professional but loving training regimen and his ability to get the best out of his “best friend.”

In his brief but impactful career on the DockDogs® circuit, Yeager has already racked up an impressive resume, including “Rookie of the Year”, “Iron Dog” and “Most Inspiring Team.”

Dave and Yeager’s story is about much more than a man and a dog. It’s about the team they have created, Go Team 21 to be exact. Six years ago Dave’s daughter, Eve was born with Down Syndrome.  Like all parents he experienced joy, gratitude as well as fear, confusion, and stress about how to navigate and provide best for his child.

In the years since, as Dave came to understand the beauty of Down Syndrome,he never forgot the support he received.  Learning that interventions between birth and age 3 make the biggest difference.  Being ‘in the know’ and having access to interventions and support groups was of the upmost importance.

Dave is so appreciative of the support his family received that he and Yeager have reached an agreement: ALL of Yeager’s winnings from ALL competitions and appearances go to advocate for Down Syndrome programs, organizations and causes.

And it all started with a Craigslist find and beautiful child’s soul.